OpenAI's CLIP and Dall-e seem to be trained on copyrighted material and pornography (and for some reason associates that with pokemon?)

Recently, I've been playing with OpenAI's CLIP[1] and the dVAE from Dall-e[2] and I've found some very interesting behavior by accident. I first found a great colab notebook from @advadnoun that steers the dVAE using CLIP. I'll describe that below. If you already know how that works, you can skip ahead to the Results section. For those interested, the notebook can be found here.
NSFW WARNING: There are blurred images produced by the dVAE near the end of the results that I would personally consider NSFW. They aren't clearly elicit but they generate a definite vibe of NSFW features. You can unblur each image by clicking on it. This way you can still read this at work as the images are default blurred.

OpenAI released Step 1 of dall-e (the dVAE) and step 4 (CLIP). Using the notebook I linked above, we can experiment with the dVAE by using CLIP to steer the image tokens from the dVAE embedding. Given an input phrase and a random initialization of an image, we iteratively move the dVAE image embedding until it's closer and closer to the given text according to CLIP.
My first experiment was the same as what they tried in the blog post with full Dall-e. "An armchair in the shape of an avocado." Granted this isn't near as good as the full Dall-e method, but it's still very cool! You can see both elements of armchairs and avocados in this. I also tried "a cube made of rainbow". 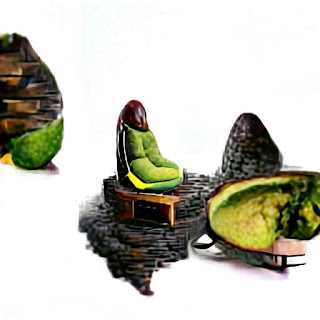 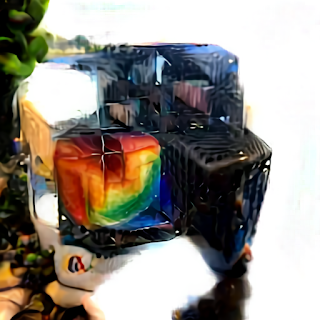 I noticed the cube image seems to have shipping crates and that got me thinking about what else it could accidentally capture. My initial wonder was whether copyrighted material could be produced by either Dall-e or this CLIP based dVAE steering. I noticed it starts breaking down and just generating deep dream like features when given single words. So I started trying different cartoon tv shows to see what was generated (Thanks to Cusuh and Andrew for the suggestions on what shows).

Below you can see the results, below each result is the show involved (they are all from the late 90s/early 2000s). I've blurred out the show name under each one so you can guess before clicking to reveal. 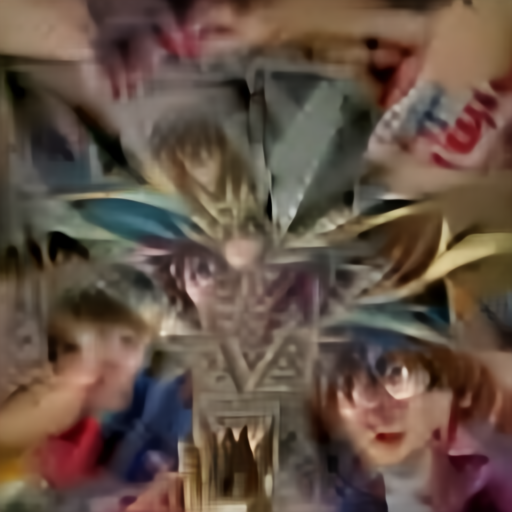 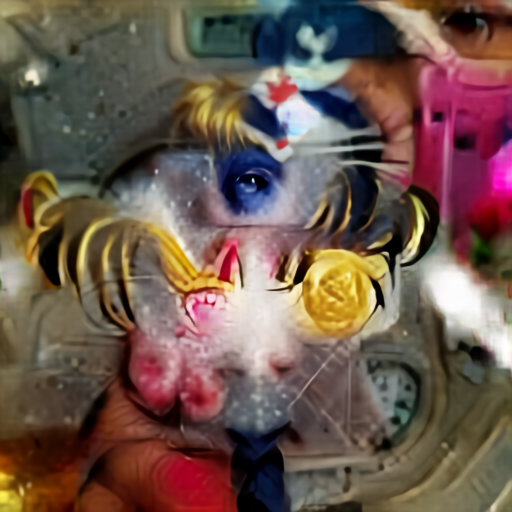 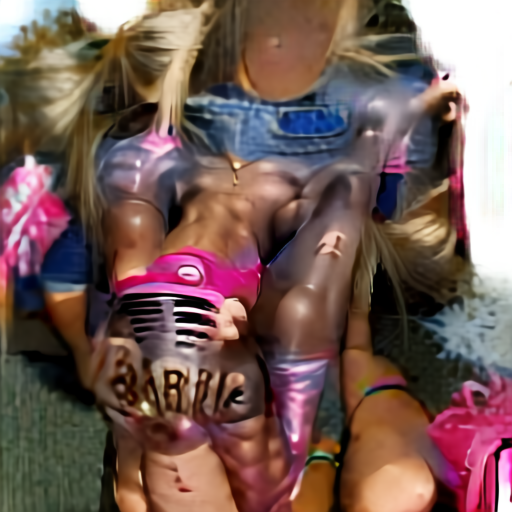 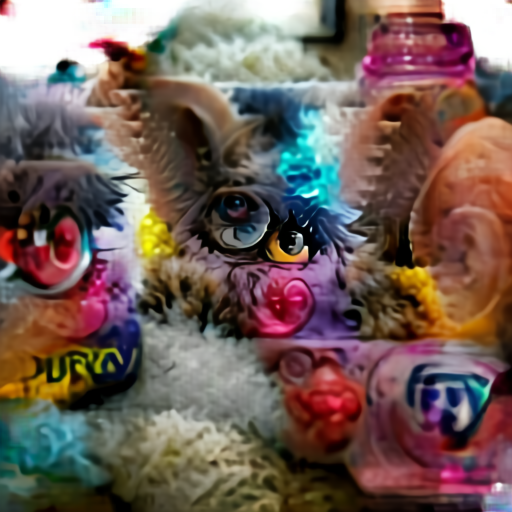 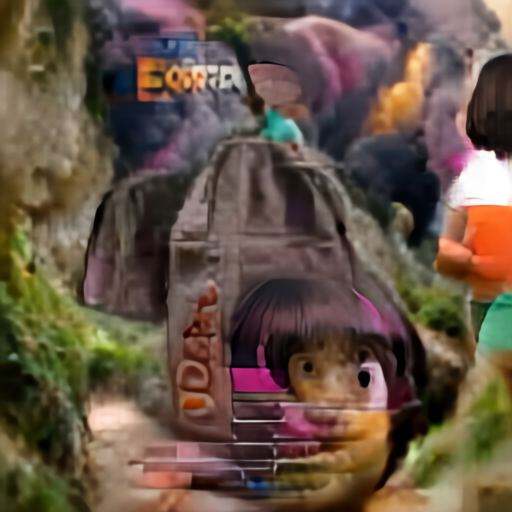 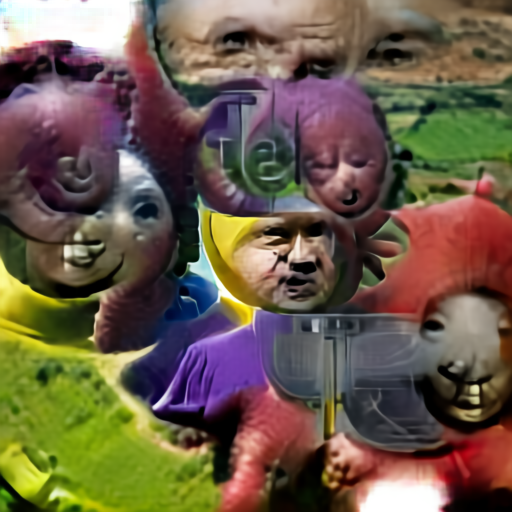 You can see for all of these, it generates features specific to these copyright TV shows/products. It's not exaclty clear image outputs, but given the Dall-e results but given this, it's like Dall-e could recreate close knock-offs to copyrighted images. This is true for all of above but it's definitely not true for pokemon. I had pokemon go on my phone recently so I started by just typing in pokemon, the results were not what I expected. I've displayed them below blurred (click to unblur).

Next I tried different types of pokemon. These were less repeatable than just the input pokemon and some were fine. However I did get the following as well.

The same thing happens to digimon so I was curious if both pokemon and digimon are embedded close together in CLIP and somehow pornography is also very close to those two. There may be other odd combinations that I just haven't stumbled across yet.
Testing these images as input to CLIP with the imagenet labels for zero-shot classification, they are frequently classified as below (these are from the imagenet 1000 class labels):
If I add pornography as a label, they are classified as pornography.
If I also add pokemon as a label, they are overwhelmingly classified as pokemon.
Because the Dall-e dVAE is generating these images so well, I suspect there was a decent amount of nudity in the training set. Given CLIP's preference for these features and it's own knowledge of the label, I suspect it was trained on this data as well. I do think these are both really interesting and impressive models but it's definitely important that we look into these unusual connections it's making and why it could be happening. You definitely wouldn't want a method for stock photo generation generating nudity when you are asking for pokemon (assuming you also had permission to use the likeliness of pokemon).
In their paper, they don't discuss how they scraped images from the internet and if any filters were put in place, so it's unknown what was done, but likely more should have been done. We don't currently have rules on training generative models on copyrighted data but maybe that's also a consideration as these methods get better and better. Given larger and better generative models, replicating the style or content of an artist becomes more and more possible and closer to reality. I think that could potentially be a future problem for content creators.
If you are skeptical of these results, check out the notebook yourself and try! I did not cherry pick these examples. It happened pretty much every time for me. I will say that the charmander it created for me was fine. I'm hopeful blogger won't now mark this post as adult material given the images above.
[1]  Radford, Alec, et al. "Learning transferable visual models from natural language supervision." arXiv preprint arXiv:2103.00020 (2021).
[2]  Ramesh, Aditya, et al. "Zero-Shot Text-to-Image Generation." arXiv preprint arXiv:2102.12092 (2021).
[3]  van den Oord, Aäron, Oriol Vinyals, and Koray Kavukcuoglu. "Neural Discrete Representation Learning." NIPS. 2017.
My opinions are my own and and do not represent the views of my employer.