So a couple of days ago I decided I wanted my Pi to be a Settlers of Catan server.
I decided on using a custom compiled JSettlers version instead of the C++ pioneer version because of the extra perks it had.

It runs surprisingly well considering it is in java but it makes sense since it is making the client's computer do most of the work. I was also decently surprised with the bots. The server allows you to create practice games against bots or real games where other people can sign up to play with you.

It also has multiple scenarios and lots of documentation. Sometimes it is a little buggy but overall I'm pretty happy with it as of right now.

I've uploaded the version I have compiled and an install script. To run it, first you need to have java and apache (or some other web server) installed. If you don't, run:
sudo apt-get install apache2 openjdk-7-*

**Note, you don't need apache to run, you could use others such as NGinx or no web server at all and just play the game by yourself.

Here is what it looks like playing a game hosted from the pi on my fedora laptop. 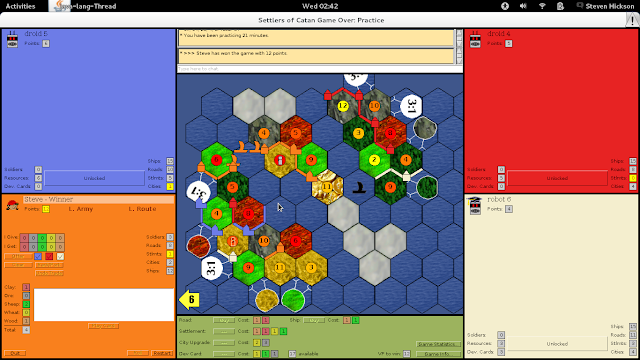 Consider donating to further my tinkering

Posted by Steven Hickson at 1:19 PM
Email ThisBlogThis!Share to TwitterShare to FacebookShare to Pinterest